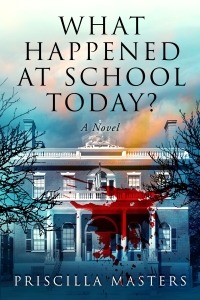 What Happened at School Today?

As a child Pris was the youngest of three sisters growing up on the outskirts of Lincoln, Nebraska. With frugal parents and life as it was in the 60s, the girls made weekly trips with their mom to the public library. Their home was a quiet one, with noses in books more often than glued to a TV. Pris developed an insatiable thirst for one genre in particular; mysteries. Moving to a small town in northern Ohio as an adolescent, she was not a very serious student and gave little thought to a future career. She certainly never dreamed of becoming a teacher. She was an average teenager, hanging with friends, checking out the boys, challenging parental limits, and always reading.

When it came time to go off to college, she intentionally chose a large city school, reveling in the idea of getting lost in the masses and always being able to meet new people. It wasn't until her senior year at the University of Cincinnati that a loosely formed career plan began to take shape in her mind. Because of a volunteer experience she had with autistic children, she became interested in special education. Leaving UC with a Masters in Education, she thought she would teach for four or five years and then see what else she wanted to do with her life.

She married Scott during her first year as a teacher. She found teaching to be a good niche for her, and neither the marriage nor the career has ever given her a boring day. As her two sons, Joel and Justin grew, she felt fortunate to have a career that was so compatible with parenting. Working with children who had Down syndrome, cerebral palsy, autism, and other developmental disabilities always provided Pris with challenges. Teaching across subjects; science, social studies, math, reading, and language arts offered her areas to focus on professionally and helped her develop adult interests. Classes in science fostered her personal growth as a gardener and a greater appreciation for the forests of the midwest (so absent on the Great Plains of her childhood). Writers Workshops caused her to become addicted to writing.

Retiring from teaching after thirty years, Pris found a part-time blue-collar job that she loved at the Greater Cincinnati Airport (which oddly enough is located across the Ohio River in Kentucky). She was employed as a ramp agent, signaling planes into their gates, loading and unloading baggage. She enjoyed the physical work and loved the very different environment from the world of education. She has recently retired from Delta Airlines, causing one friend to call her a "serial retirer." Now having time on her hands, she has had no excuse to not finish her first novel, What Happened at School Today?

She is currently plotting another murder.